The four schools this year are Farleigh (Fenella Strong) and Test Valley (Frank Wheeler) whose winning works will be displayed in the High Street windows during the first week of the Show which is 19th July - 27th July 2019.

The second week of the Summer Show will have the other two school winners on display from Sat 27th July - Sat 3rd August, which are Cheam (Thea Eadie) and Peter Symonds (Sam Ricaud).

Gerald Dodson, the owner of the Wykeham, whilst choosing the winning piece at Peter Symonds saw the Textiles on display and due to the Wykeham's continued support of The Grange Festival and having just seen opera there,  was very inspired by these pieces and has decided to dedicate week 3 of the Show to Peter Symonds Textiles.

The winner of this was a student called Daisy Hall whose two pieces can be seen in the windows from  Sat 3rd August - Sat 10th August 2019.

The winner for the 2019 Wykeham Young Arts Project from Farleigh School was Fenella Strong who produced a wonderful piece entitled "Elephants".  There is so much skill involved in her execution of this family scene, along with the earthy tones she uses.

Her parents and Jo Maw, the Head of Art at Farleigh School, were at the Private View to celebrate her win, which now has pride of place in one of the High Street windows until Saturday 27th July 2019.

The Test Vallery winner who takes pride of place in the other window this week was a strong textured oil painting called "An Unlikely Pair" by Frank Wheeler, who can be seen above with his parents at the Wykeham Private View,  alongside James Williams, the Head of Art at Test Valley School.

Frank's oil painting was brilliantly executed by enhancing the light and shadows of the fruit, resulting in this wonderfully textured interpretation.

This painting "The Moment" is by Thea Eadie from Cheam, whose Head of Art at Cheam Jo Clark, informed us that Thea's painting had been chosen and exhibited at the Royal College of Art in London, unbeknown to Gerald Dodson at the time he chose this piece.

It is a wonderfully soulful interpretation of a young girl waiting for her partner strongly depicted in oil pastels.

This beautiful architectural piece "View Through a Window" is by the Peter Symonds winner, Sam Ricaud, the Head of Art at Peter Symonds, Mark Jones explained that Sam's work depicted the outside as a theatrical backdrop in this work with the energy of the curtain bring the outside in.  Sam's painting will be in the window from Sat 27th July - Sat 3rd August 2019. 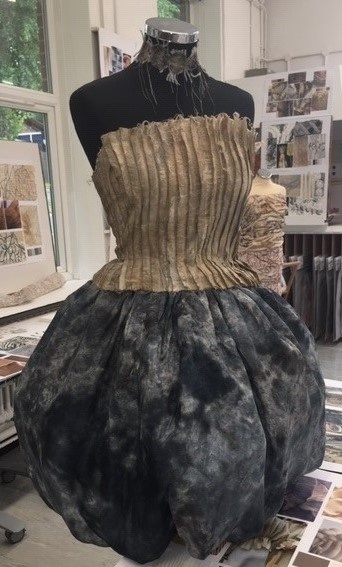 These two wonderful pieces are from Peter Symonds Textiles which is run by Beki Vaile and the winning student is Daisy Hall.   The above pieces are called "Beach", which is in response to the ever increasing issue of polution of our oceans and "Woodland and Fungi" which looks at the natural textures of nature.

These two original pieces will be on display at the Wykeham for the 3rd week of the Summer show from Sat 3rd August to Sat 10th August 2019.

View all posts by Gerald Dodson